Chronic pelvic pain can be one of the reasons why females are suggested to undergo Hysterectomy operation in Jaipur. One of the commonly performed gynaecological operations, the hysterectomy is a surgical procedure to remove the uterus after which a female loses the ability to conceive. If you have not reached the menopause stage, the menstrual cycle will stop as a result of this procedure. Therefore, Hysterectomy is more common in women aged 40 to 50 years but in exceptional cases, it is also performed in young women. Moreover, the operation is undertaken in extreme situations where medicines and other kinds of non- surgical treatments fail to provide the desired results and relief to the patients. At our hospital, we perform Total Abdominal Hysterectomy, Vaginal Hysterectomy, and Total Laparoscopic Hysterectomy.

Many health problems that affect the female reproductive system are responsible for Hysterectomy operation in Jaipur. Some of the reasons identified include heavy periods, different types of gynaecological cancers such as ovarian, cervical and uterine cancer, fibroids, and non-cancerous (benign) tumors in the uterus, long term pelvic pain. In addition to this, other causes that lead to hysterectomy include uncontrolled and abnormal vaginal bleeding due to hormonal changes and pelvic inflammatory diseases that arise due to infection in the major female reproductive organs such as the cervix, ovaries, fallopian tubes, and uterus. Furthermore, specific conditions like Endometriosis, Adenomyosis, and Uterine Prolapse are also considered as the prime causes of undergoing Hysterectomy treatment. 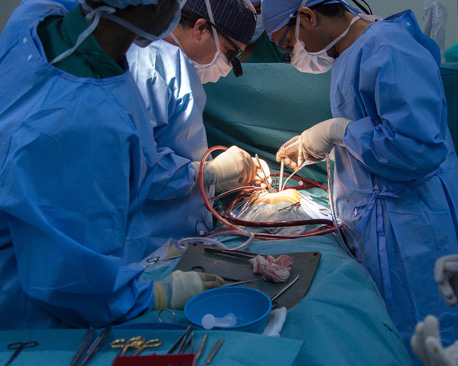 In earlier times the operation for Hysterectomy in Jaipur is performed as an open surgery in which incisions were made through the abdomen. But with the advancement in technology and the emergence of newer techniques, most of the operations for uterus removal are laparoscopic-assisted or is done through a vaginal hysterectomy. The operation in this procedure is performed through the vagina rather through the abdomen. One of the major benefits of the keyhole or laparoscopic uterus removal surgery is that the hospital stay is relatively smaller as compared to open surgery and patients can be discharged within a day or two. Moreover, this method of surgery involves less pain and has a fast recovery rate.

In the laparoscopic method, a small laparoscope is used that contains a camera on the top. The surgeons insert the laparoscope through the tiny incisions that are made on the abdomen. The camera attached to the laparoscope when inserted through the incisions provides a clear view of the internal organs. Thereafter the various instruments are inserted through other incisions made in the abdomen or the vagina. This enables to remove the different parts of the female reproductive system such as the uterus, cervix, ovaries, and fallopian tubes. On the other hand, in the vaginal hysterectomy, the uterus and cervix are removed by making an incision at the top of the vagina. It is less time taking as the procedure primarily involves detaching the womb from the ligaments that hold it in place.

A healthy lifestyle is the only option for better and recovery from Hysterectomy operation in Jaipur. Our gynaecologists at the hospital recommend that good nutrition, quality sleep, regular exercise, and reducing the stress level are a necessity post-recovery. Intake of grains, legumes, and leafy vegetables are a good source of fiber. Stress can lead to hormonal imbalance in the body leading to irregular menstrual cycles which significantly affects the female reproductive organs. Therefore, our doctors recommend patients to take enough rest and sleep so that they can have proper relaxation. It is quite normal to gain some weight after the surgery but avoid being obese and try to keep your weight under control.